Dr Ashley Kruger is palaeontologist and palaeoanthropologist at the Swedish Royal Museum of Natural History, and the Centre for Palaeogenetics, Stockholm University, Stockholm, Sweden.

After matriculating from King David in 2005, Ashley pursued his interest in fossils and human evolution and completed an undergraduate at the University of Johannesburg, and a BSc (Honours) at the Bernard Price Institute for Palaeontological Research, University of the Witwatersrand.

In 2013, while completing his MSc at Wits, Ashley’s work became an integral part in the National Geographic ‘Rising Star Expedition’ leading to the discovery of Homo naledi – a new fossil hominin found in the Cradle of Humankind, just outside of Johannesburg. Now the largest fossil hominin site on the continent of Africa (currently the second largest in the word), Homo naledi and the Rising Star site have shed much light on the evolution of the human species.

He was part of the same team receiving the prestigious Nation Research Foundation of South Africa’s ‘Science Team Award’ in 2014 and is an author on a number of published papers on Homo naledi appearing in many international, peer-reviewed journals.

For his work at Rising Star, Ashley was awarded a PhD in Palaeoanthropology from the Evolutionary Studies Institute at Wits. Ashley’s PhD thesis focused on understanding the site formation and spatial context of hominin sites in the Cradle of Humankind. During this time, he pioneered a new method for digitally recording and analysing fossil discoveries in underground cave sites, a methodology widely used in archaeological excavations around the world today.

Ashley has completed fieldwork in many countries, including South Africa, Zambia, Argentina and Sweden and has undertaken excavations at a number of famous South African hominin sites. To date he has described two entirely new fossil species to science.

Ashley relocated to Stockholm, Sweden in 2018 and continues to develop his expertise in palaeoanthropology by engaging in cutting-edge, ancient DNA analysis. His research interests are broad, aiming to answer important questions about human evolution, from our most distant non-mammal relatives (about 260 million years old) to our most recent human ancestors (about 1 million years old). 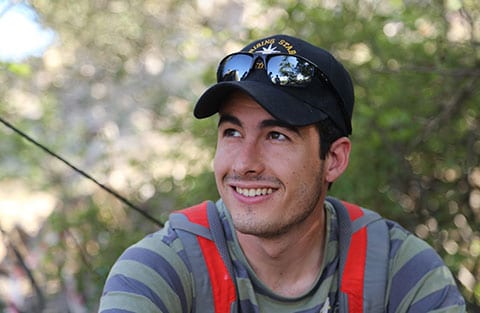 “My love for biology and Earth sciences stems from my years at KDHSVP where teachers such as Melissa Ho inspired me to pursue a career in the natural sciences. I credit much of my success today to the excellent foundations and education I received at King David”