After matriculating from KDHSL, Earle studied for a sports science degree, then went on to complete an honours degree in clinical psychology and a masters in sport psychology, all these degrees were completed at Wits University. He had a successful lectureship at Wits University, before relocating to the United Kingdom in 2001. He is programme leader a senior lecturer in sports therapy at the University of East London.

Internationally, he has presented his work on teaching and learning practices, reasoning development, feedback and assessment, sports rehabilitation and sport psychology at major conferences, conventions and workshops. Earle is actively involved with the Scholarship of Teaching and Learning and was in May 2019, honoured with an international fellowship. This was two days after he was recognised for his teaching and commitment to the student experience at the University of East London with a Vice Chancellor Excellence Award.

He co-chairs The International Society for the Scholarship of Teaching and Learning (ISSOTL), multinational teaching fellows’ interest group. Earle is leading an International Writing Group and regularly publishes his scholarship in peer reviewed journals. He is the co-founding editor of the Journal of Impact Cultures (https://www.uel.ac.uk/research/jic).

He chairs the UK National Massage Therapy Institution, is an elected member to the professional subject board for Massage on the CNHC (The Complementary and Natural Healthcare Council) and Vice Chair of the GCMT (The Council for Soft Tissue Therapies).

During 2012 he was part of the medical team for the Olympic and Paralympic Games. In 2017 he was asked to lead the sports therapy services for the World Athletic Series in London. In the same year he won the Turnitin Global innovation award for student engagement for the UK.

He has been honoured and received numerous awards for both his teaching (Principal Fellow of the Higher Education Academy) and professional practice. He has authored and co-authored a number of textbooks his most recent ones are: Making Sense of Learning Human Anatomy and Physiology – Lotus Books 2016, and the Concise Manual of Muscle Testing – Handspring Publishers – out October 2019.

Earle recalls the wonderful days of his educational experience at King David. He was inspired by a number of teachers, but the one that stands out most in his memory was Ronnie Mink, who encouraged him to purse his dreams and impact positively on the lives of others. For Earle, the King David experience was not only about learning to do things better, but more importantly doing better things.

Earle is married to Emma and they have two sons Benjamin and Oliver. 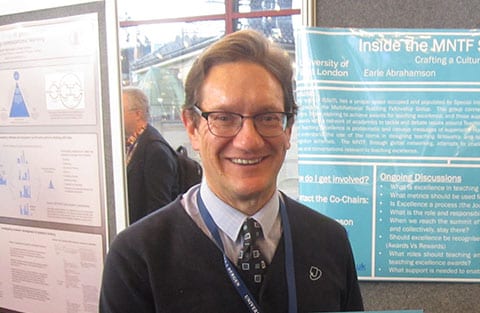