While at Sloan-Kettering he completed his surgical oncology fellowship, and a post-doctoral fellowship in immunology. He was active in soft tissue sarcoma surgery and clinical research, and laboratory and translational research in immunology and EGF-family signal transduction.

Prior to Sloan Kettering he completed his general surgical residency and PhD in growth factor signal transduction at Yale and University of Witwatersrand. He has led global translational and clinical research in cancer and has helped develop several new drugs in cancer.

He has received numerous honors and awards in medicine and science, including the ASCO Young Investigator Award, the Kristen Carr Fellowship, the Yale University Ohse Fellowship, the Royal College of Surgeons Trubshaw Medal, and the Sarcoma Foundation of America Hope and Vision Award. He has served as Board Director and Chairman of several biotechnology and technology companies.

He serves as a Director on the Board of POPPA (the Police Organization Providing Peer Assistance) of the New York Police Department (NYPD). He also serves as an Honorary Board Member of the Sarcoma Foundation of America, and the Scientific Advisory Board of the Combat Wound Initiative and Limb Salvage Program of the Henry Jackson Foundation for the Advancement of Military Medicine.

Dr. Lewis was elected the first Life Trustee of the Hope Funds for Cancer Research, an organization dedicated to funding basic science research on the most-difficult-to-treat cancers, having formerly served as, Chair of the Scientific Advisory Council, and as the second Chairman of the Board of Trustees.

He was recently asked to contribute to ASCO Perspectives, on caring, for which he wrote this:  https://www.ascopost.com/issues/june-25-2019/from-d-day-to-cancer-care/ 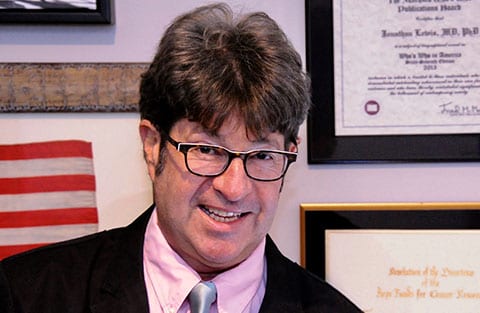 "All of my high school teachers and the KD environment had a significant influence on me. I learned how to learn, how to debate, and how to compete on sports and all fields. I also learned in October 1973 in Jerusalem, with many KD friends together with Israeli family. I am still very connected to Israel and Africa, with a value system that was born at home, and cultivated at KD."