Ryan Canin is the co-founder and CEO of DocFox. DocFox is on a mission to make money laundering impossible through automating FICA compliance for financial instutions. DocFox’s technology is being used by over 150 financial institutions worldwide with offices in Miami and Johannesburg.

Ryan got a taste for social entrepreneurship at age 13 when he broke an obscure world record and created the largest canned food construction in aid of charity. The project collected over 9 tons of food for 7 charities in Southern Africa. It was here that he realised that if you have an idea, the difference between making it happen and just dreaming it is simply taking the first step.

Ryan continued working in the social entrepreneurial space throughout high school as the Junior Mayor of Johannesburg; as well as being selected as a Global Teen Leader for the first Three Dot Dash Summit by the We Are Family Foundation in New York City. All these exciting opportunities happened while Ryan was at King David Victory Park and he believes it was through the support and encouragement of all his teachers that he was able to do it. “Whether it was Renos Spanoudes who helped me draft letters to Jonathan Ackerman to get sponsorship for the world record attempt, Joseph Gerassi who supported me in taking part in a Summit in New York during my matric year or all my teachers who ensured I had all the time, resources and materials to be able to take advantage of these opportunities while still keep on top of school”

While studying Electrical Engineering at Wits, Ryan co-founded Gladi8, a software business. After graduating, he went into Gladi8 full-time and sold custom software development to large financial services institutions such as Liberty, Barclays and Standard Bank. While working in this industry they spotted the need for a KYC (Know Your Customer) solution to ease the pain surrounding the need for clients to submit their identity and address documents in person when opening accounts.

Ryan then co-founded DocFox, a fintech startup which attracted Silicon Valley investment in its first round of funding and subsequently grew its investor base to include South African investors as well. DocFox has grown and now has offices in both the US and South Africa and serves over 150 financial services firms globally. Ryan moved to the USA to expand the business and lives with his husband and two Saint Bernards in Miami. 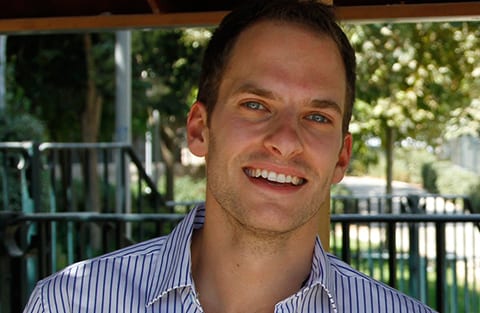