Lael Bethlehem is an investment executive at Hosken Consolidated Investments (HCI), a listed investment company, where she has worked since 2013. HCI was created by the South African Clothing and Textile Workers’ Union, which is still a major shareholder.

Lael started her career as a researcher in the trade union movement in the early 1990s, working at the Industrial Strategy Project, the Cosatu Research Centre and Nedlac.

From 1998-2002 Lael served as Chief Director of Forestry in the National Department of Water Affairs and Forestry. From 2002 – 2010 Lael worked for the City of Johannesburg first as the Director of Economic Development and then (from 2005-2010) as CEO of the Johannesburg Development Agency. AS CEO of the JDA, Lael and was deeply involved in inner city regeneration as well as township development. From 2010-2013 Lael served as Head of Real Estate Investments at Standard Bank (2010-2013) where she was involved both in affordable housing and commercial property development.

In 2013 she joined HCI, responsible for investments in inner city property and renewable energy. She is also responsible for the Environment and Empowerment strategies for the Group. On the housing side, Lael has led the development of an inner city property portfolio with 1100 affordable, high quality residential units, 60 retail shops and 5000-m2 of office accommodation. On the energy side, Lael has been involved in the development of Karoshoek Solar One, a 100 MW Concentrated Solar Power project in the Northern Cape, of which HCI is a part owner.

Aside from her work at HCI, Lael is a Director of the Industrial Development Corporation, a state owned development finance institution, and Sedibelo Platinum, a platinum mining company.

Lael is married to Emilia Potenza, the Curator of Exhibitions and Education at the Apartheid Museum. They have two daughters, Noluvo and Thembela, both of whom were adopted from the Princess Alice Adoption Home in Johannesburg.

Lael has an active Jewish life. She is the prayer leader at Temple Israel in Hillbrow where she runs regular services. During lockdown she has been teaching Hebrew and Jewish studies classes online for a small but enthusiastic congregation, along with online prayer services. 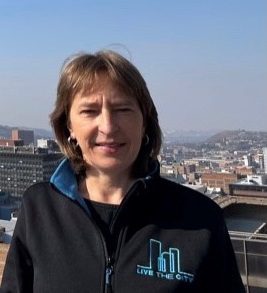 "King David gave me an excellent education, an opportunity to explore a wide range of interests, and a group of lifelong friends. It also gave me a Jewish education which I deeply appreciate. Ulpan was a great highlight and really enabled me to speak Hebrew! Some of my teachers really stand out - especially Karen Durbach who taught me English and French and gave me a love of poetry; and Michelle Friedman who opened my eyes to the reality of apartheid".